In Russia, a few years ago, the newest enterprises for the development and production of vital nanovaccines and biological products, including vaccines against viruses like COVID-19, were supposed to start operating. This did not happen for a banal reason — the funds allocated by the state in the amount of 400 million rubles were simply stolen. These funds Rusnano, headed by Anatoly Chubais, transferred the NTpharma company to the construction of the plant and were taken out of Russia. Only "pawns" appeared before the court — the founder and general director of NTpharma LLC Rustam Ataullakhanov and Yevgeny Sultanov. And no one from Rusnano has answered for these thefts. But even the organizer of the theft from the other side was not involved. Sources of Rucriminal.info said that one of the organizers of this whole scheme for withdrawing budget money from Russia was the main shadow businessman of the Russian medical business Valery Glavatsky. Having colossal experience in tax, withdrawal, conversion and money laundering, it was not difficult for him to turn the scam. Having connections in the FSB of the Russian Federation and a number of law enforcement agencies, he escaped responsibility and settled abroad, already from there continuing his activities. Glavatsky is still the main shadow business in the medical business and you will hardly find mentions of him in the media. Only in the history of the current owner of R-Pharm, Alexei Repikak. When the latter, at the dawn of his career, was the sales director of Rosmedkomplekt, 10% of the company belonged to Valery Glavatsky. Rucriminal.info has at its disposal the materials of the case of the theft of 1.3 billion rubles, which we will publish in parts.


Criminal case No. 201 / 813378-13 is being investigated into the fact of abuse by the financial director of the State Corporation "Russian Corporation of Nanotechnologies" S.V. Ponurov. their official powers in spending the funds of the named corporation, i.e. on the grounds of a crime under Part 3 of Art. 285 of the Criminal Code of the Russian Federation. During the preliminary investigation, it became known about the commission of R. Ataullakhanov, E. Sultanov. and other unidentified persons of a crime not related to the crime under investigation. 06/22/2009 the Board of the State Corporation Russian Corporation of Nanotechnologies (GK "Rosnanotech" or Corporation_ decided to finance the creation of production of nanovaccines and therapeutic biologicals based on pseudoadenoviral nanoparticles and nanostructures containing a carbohydrate-binding domain (hereinafter Project 575) in the amount of not more than 1.3 billion rubles.


Later, Deputy General Director of the Corporation Malyshev A.B. July 26, 2010 signed an investment agreement with NTpharma LLC on the implementation of Project 575, pledging to transfer 237 million rubles to the named project company as a contribution to the authorized capital and 1,063 million rubles in the form of loans, the purpose of which is the construction of a pharmaceutical plant with the commissioning May 2012, legalization of the release of nanovaccines and therapeutic biologicals by August 2012 and the beginning of production by September 2012. The construction of a pharmaceutical plant is announced on the territory of the Pereslavsky district of the Yaroslavl region.


On September 28, 2010, Rosnanotech Group fulfilled its obligations under this agreement by transferring funds in the amount of 227 million rubles to the authorized capital of NTpharma LLC to a special account No. 40702810400000007162 with Petrocommerce OJSC as a contribution


December 17, 2010 between the State Corporation "Rosnanotech" in the linden Malysheva AB and LLC NTpharma, represented by General Director Stanov, entered into loan agreement No. l, according to which the Corporation undertook to provide the project company with a loan of up to 1,063 million rubles for a period of 7 years.


Ataullakhanov R.R., being the founder and therefore the main beneficiary of the activities of NTpharma LLC, using the full control of the general director of the company E.P. Sultanov, who, in accordance with the Charter of the company, was entrusted with the funds received from the Rostanotech Group of Companies, and then from RUSNANO OJSC (hereinafter also the Corporation), not wanting to use the funds received for the implementation of Project 575 and not having the necessary technical resources and experience in implementing such projects, he decided to spend the funds at his own discretion for other purposes, expecting to conceal the criminal acts committed in the future by repayment of previously received loans at the expense of funds newly received from the Corporation as regular tranches under the loan agreement dated 17.12.2010.


To fulfill his plans, he used the accounts of organizations under his control with signs of fictitiousness, such as BIOCON, LLC Biomed Invest, O00 Immafarma, LLC NPO Sintez, MEDEZRIN, BIOTESTLAB, which were managed by him through unidentified persons.


In the period from 28.09.2010 to 22.06.2012, being in Moscow, Sultanov E.P., fulfilling the will of Ataullakhanov R.R., acting together with other unidentified persons, transferred in favor of these organizations to the account eta in CJSC "GREENFIELDBANK" (Moscow), LLC CB "CONTRAST-BANK" (Moscow), LLC CB "FINANCE BUSINESS BANK" (Moscow), CB "Priroda" (Moscow), JSC "TransCreditBank" (Moscow) in total at least 457.2 million rubles under the guise of payment for the supply of equipment and performance of work (R&D), which were not actually delivered, were not performed. At the same time, NTpharma LLC had no other sources of income, apart from the funds allocated by the Corporation. 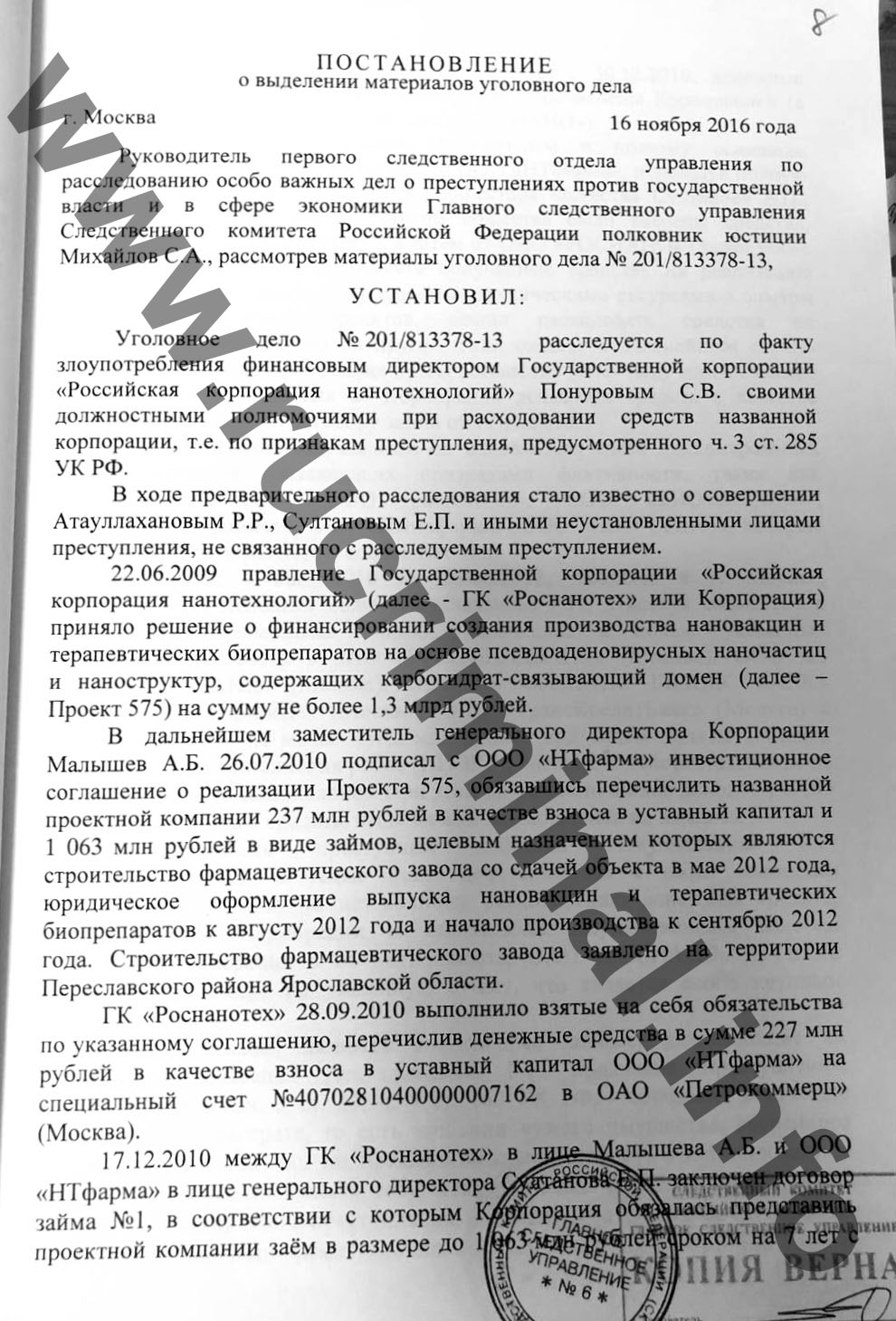 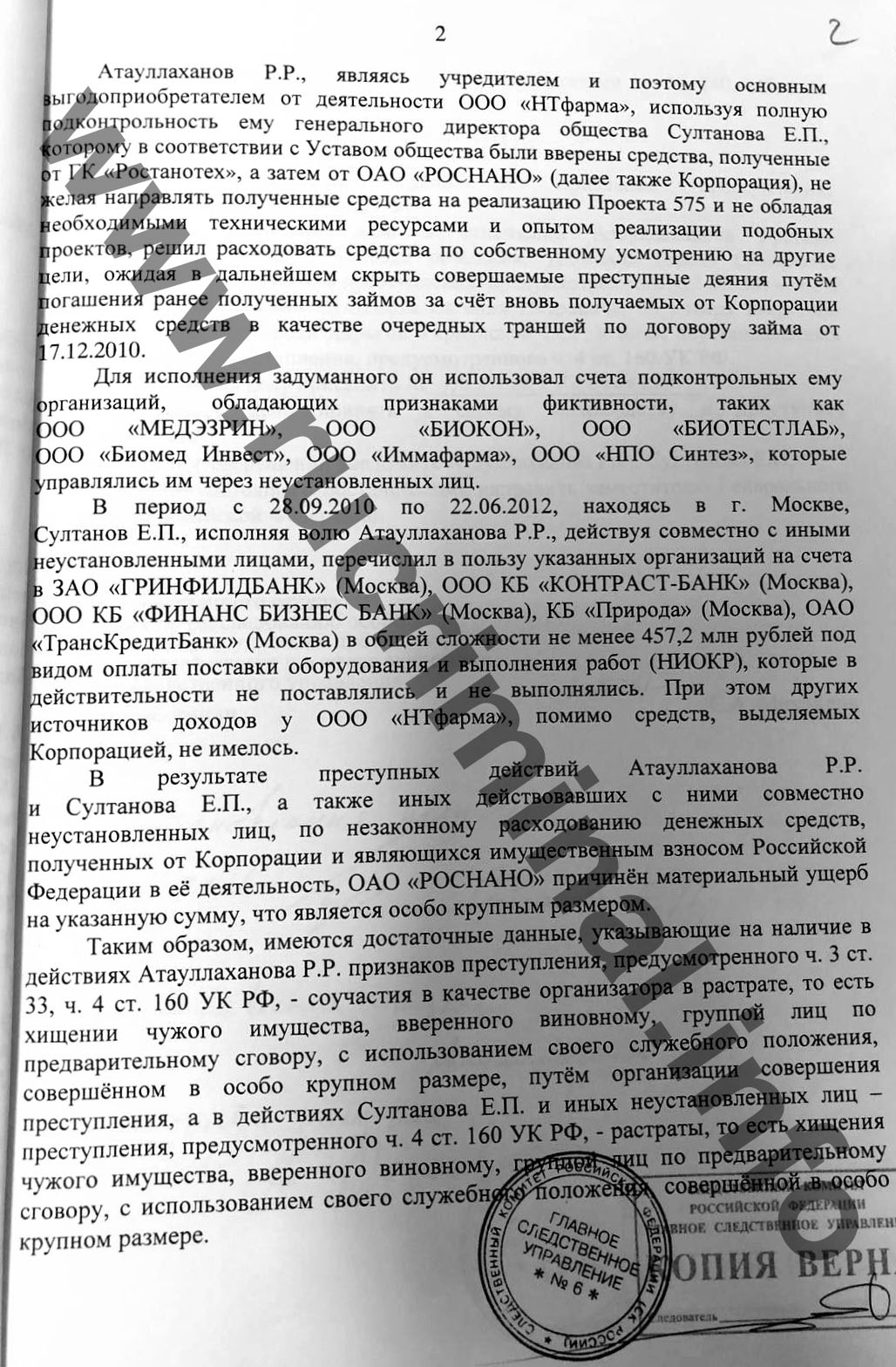