Who is the woman challenging Belarusian President Lukashenko? 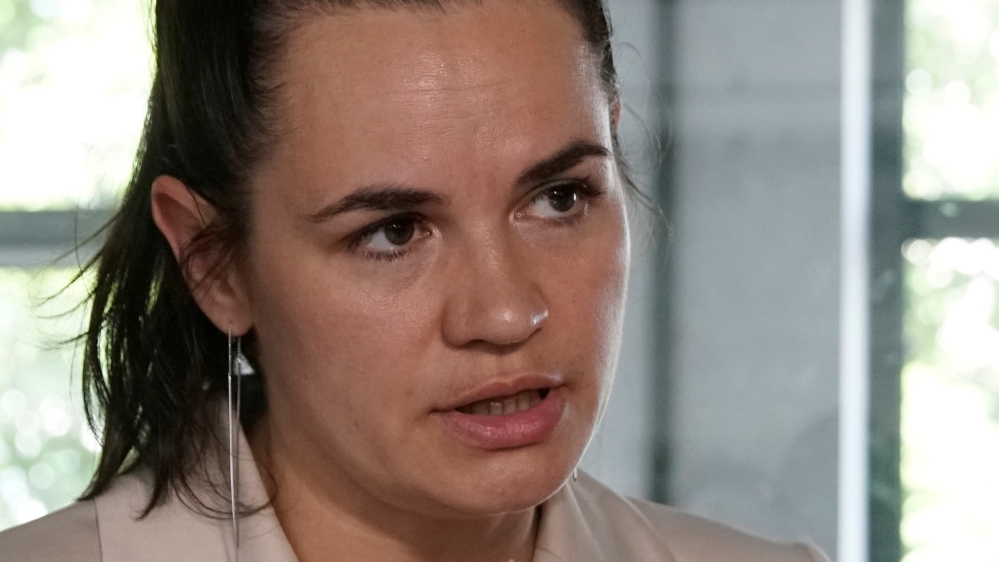 Among those who made it, along with incumbent President Alexander Lukashenko, was Svetlana Tikhanovskaya, a former English teacher and a housewife with no prior political experience.

When she emerged from CEC’s building, holding her signed registration document, journalists and allies congratulated her, but she seemed hesitant.

’I’m not sure if I want this congratulations,’ she said with a slight smile.

The 37-year-old mother of two had been receiving threats over her decision to run in the elections, which forced her to send her children out of the country, accompanied by their grandmother.

Tikhanovskaya has been honest about her lack of experience in politics and has said she had made the decision to join the presidential race spontaneously. It followed the arrest of her husband, Sergei Tikhanovsky, a popular Youtube blogger who had tried to register as a candidate.

Tikhanovskaya had hoped this would draw attention to his case and help get him released, but had not really expected the authorities would actually allow her to run. 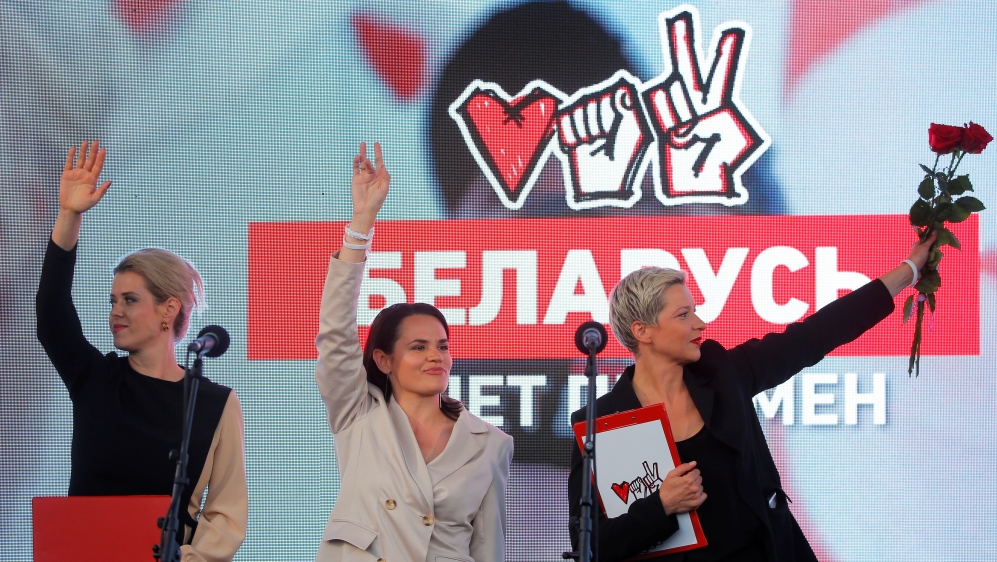 What happened next surprised Tikhanovskaya herself, the Belarusian authorities and even longtime observers of Belarusian politics.

Within days of her registration, Tikhanovskaya managed to gather massive crowds at her rallies across the country.

In Minsk, an estimated 63,000 people showed up to her campaign event on July 30. Thousands also attended her rallies in smaller provincial towns, where traditional Belarusian opposition has had a hard time establishing a foothold in the past.

Tikhanovskaya has emerged as a significant challenger to Lukashenko’s 26-year rule. Analysts predict the August 9 elections may well prove to be a turning point in Belarusian politics.

Tikhanovskaya’s transformation from a frightened housewife, who was trying to get her husband out of jail, to a popular opposition candidate happened remarkably quickly, aided by a number of factors.

First — the authorities did not seem to perceive her as a political threat.

’Tikhanovskaya, at the beginning of her campaign, appeared very weak. She was indeed under enormous pressure, she was very scared,’ Katia Glod, a London-based scholar and consultant on former Soviet countries, told Al Jazeera.

’The authorities thought ‘well, she is very weak, we can easily pressure her, we can destroy her at any time’. But they miscalculated,’ she said.

According to Glod, the reason for this miscalculation is Lukashenko’s own patriarchal, retrograde views on women.

In late May, as Tikhanovskaya was still gathering signatures for her nomination as candidate, Lukashenko said in a speech at a tractor factory in Minsk that he was ‘absolutely sure’ the next Belarusian president would be a man.

’Our constitution is not for women. Our society has not matured enough to vote for a woman. This is because by constitution the president handles a lot of power,’ he said.

On July 17, three days after Tikhanovskaya received her registration documents, she was endorsed by two disqualified opposition candidates: Viktor Babaryko and Valery Tsepkalo.

On the campaign trail, she was joined by two other women — Barbaryko’s campaign manager Maria Kolesnikova, and Tsepkalo’s wife Veronika, who helped provide organisational and logistical support.

The three of them appeared together on campaign posters and at rallies, thus solidifying the image of a women-led campaign challenging Lukashenko’s patriarchal rule.

According to Glod, Tikhanovskaya’s popularity is also due to the fact that she has come to represent a new force in Belarusian politics, centred around Barbaryko, a former bank manager, Tsepkalo, a former diplomat, and her husband Tikhanovsky.

They have put forward a new, more positive vision for the country, different than what the traditional opposition used to offer — old political demands and nationalistic slogans.

’All these people, they are not opposition, they are a third force. They were the ones who managed in the first place to attract public support. And then Tikhanovskaya became the symbol, an instrument of change,’ Glod said.

Apart from being a new face in politics backed by a popular coalition of forces, Tikhanovskaya’s campaign has also benefitted from the growing anti-Lukashenko sentiment in the country.

According to Olga Dryndova, a Berlin-based researcher and contributing editor to Belarus-Analysen at the University of Bremen, the unpopularity of the Belarusian president has deepened as a result of his mismanagement of the economy and inconsistent information policy during the coronavirus outbreak in the country.

’It was surprising for me that people were so unsatisfied with the authorities, and personally with Lukashenko [...], that [they] just united around this new, spontaneous candidate without political experience,’ she told Al Jazeera.

Currently, there is no independent polling in Belarus and it is difficult to estimate the true extent of Lukashenko’s unpopularity, Dryndova said.

A March 2016 opinion poll conducted by the Independent Institute for Socio-Economic and Political Studies before it was forced to stop its operations nine months later, suggested that about 27 percent of respondents were willing to vote for Lukashenko. 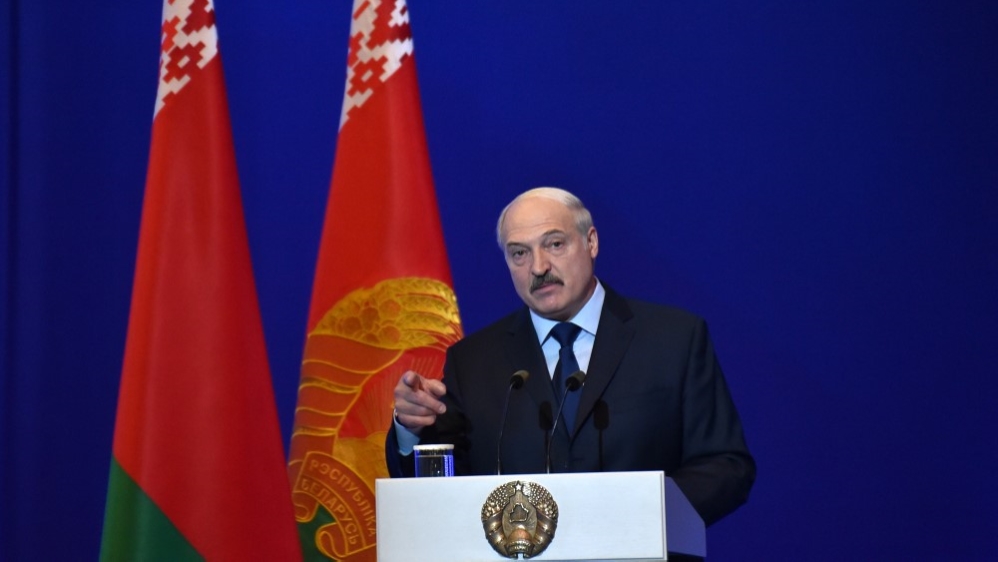 In a July 2020 poll, conducted for a state TV channel, 69.4 percent said they would vote for the incumbent president.

After the initial success of her rallies, Tikhanovskaya’s team has struggled to conduct campaign activities in the days leading up to the election, as the authorities have arrested a number of its members and started snatching from the streets people who have tried to attend her events.

Her remaining rallies were eventually banned.

State media have also reported that investigators are looking into a link between Tikhanovskaya’s husband, Sergei and a group of Russian mercenaries who were arrested on August 29 and who have been accused of preparing ‘terrorists acts’ in Belarus. She has denied any such ties exist.

On August 4, Lukashenko gave a state of the nation speech, in which he threatened ‘harsh sanctions’ against any unauthorised demonstrations ahead of the elections and implicitly warned the political elite not to ‘betray’ him.

According to Dryndova, Lukashenko appears to be ‘scared’ and he is unlikely to allow for a free and fair election on August 9.

The vote will not have international observers and independent observers have already been harassed after early voting started on August 4.

In her view, Tikhanovskaya’s campaign has galvanised the Belarusian public to such an extent that repression might not stop the popular demand for change.

’There is a feeling of majority, a majority that wants a new president and this can really bring a new dynamic of developments within the society, even if the elections are not free and fair and even if [subsequent] protests are suppressed,’ Dryndova said.

’It’s really a very interesting, historic moment for Belarus. We have never seen anything like that. Right now we really have no idea what could happen. Everything is possible. The Belarusian society is really surprising everybody this [electoral] season.’

Mariya Petkova is a Bulgarian journalist covering the Middle East, the Balkans and Eastern Europe.